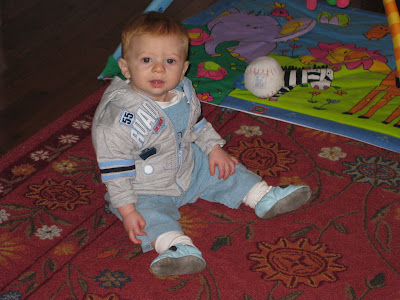 Here is Ben at 7 months old. He now has his first tooth (still too small to photograph....otherwise you know I would have!). He still does the army crawl...and I think he is quite content with that as he scoots around pretty fast. He can pull himself up to his feet....which is making me think we might have an early walker here. We had to lower the mattress in his crib! He has graduated from his infant car seat as we realized his head come over the top of it! I can't believe how big he is getting!!! He is as cute and as sweet as ever! And becoming a little rascal of a chap! 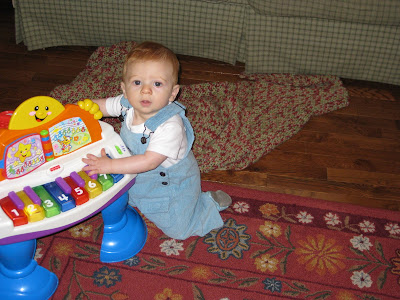 I am not sure there is anything cuter than a little boy in overalls!
Posted by Jamie Carin and Claudio Romano at 1:03 PM

I just love a baby boy in overalls!

Except maybe a boy in striped pants?