A Day of Firsts??

Well we had our first call to poison control for munching on a hydrangea (keep in mind this is a child who will eat NOOO veggies and very limited fruit.....yet will walk up to outdoor plants and take a bite???!) which it turns out is poisonous. But fear not. Apparently a toddler must ingest quite a bit of hydrangea in order for it to be toxic.

Then this morning he woke up with these two bug bites on his face. They look rather harmless in the picture but are rather purple and gnarly in real life. Not sure if it is mosquito (as we were playing in the yard yesterday afternoon...you know playing with cars and munching ornamental shrubbery), or spider. I spotted a spider in his room the day before and in the midst of dealing with a waking cranky toddler I forgot to go back and squish it. And then last night he woke shrieking at 12:30 am and was pretty inconsolable. So we aren't sure what the culprit was. But there ya go...the baby is pock marked! 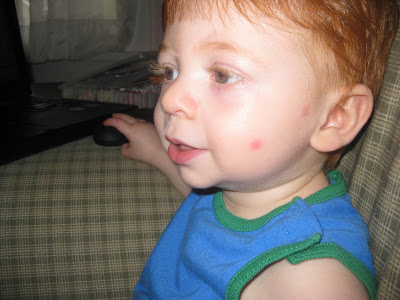 In brighter news Ben outgrew his first pair of summer sandles....they were too big just two months ago! The little computer featured in an earlier post has lead to Ben being able to identify about half the alphabet.

He has his first molar coming in. Which is causing quite a bit of heartache for the little fellow.

He can now say: bye bye, cat, bird, baby, mama, dada, papa, shoes. And he says want and trucks/cars in his own language. LOL...want is "et" and trucks is "fretz".
Posted by Jamie Carin and Claudio Romano at 8:01 PM