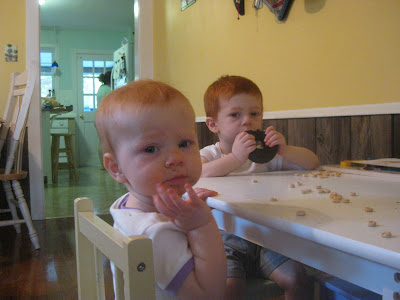 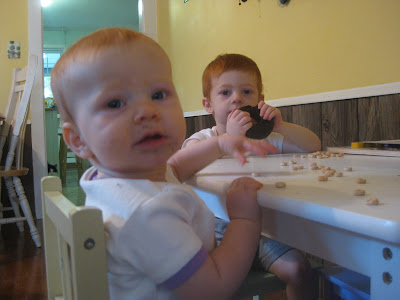 Many Many months ago Benjamin was helping Daddy cook something. He was playing with a raw egg in a bowl and got the egg all over his hands and then wiped the hands on his face. His face broke out in hives. After some benedryl it quickly cleared up. I mentioned it to a friend with has some experience with food allergies and she said that some kids can get a contact allergy and that most likely it was nothing to worry about. So we just sort of wrote it off and went on with life.
Fastforward to a month or so ago when we visited Virginia. Ben never liked eggs very much so I never made them, but when we were in Virginia my dad made Ben some scrambled eggs and he scarfed them down! I am always thrilled to find something that Ben will eat, so when we got home I made him some eggs with dinner one night.
About a half hour after dinner I noticed that Ben had bright red welts all over his arms and legs. So red that I thought he must have been playing with a red marker. When I looked closer I saw that it was all of the spots that Ben gets eczema generally. It looked like they had all flared up. Soon after this he started coughing and clearing his throat and holding his throat with his hands. Again, we ran for the Benedryl and things quickly calmed down. Ben fell to sleep from the meds and we put him to bed.
A few days later I took him to an allergist to see if we could get to the bottom of this. After a battery of skin scratch tests including everything from egg to dust it was discovered that Ben does indeed have an egg allergy (as well as a cat allergy!).
So he is currently allowed to eat no eggs, nothing that contains eggs, and not allowed any contact with eggs. We were sent home with a Rx for an epi-pen and an appt for one mont later.
Posted by Jamie Carin and Claudio Romano at 9:58 PM