Mommy Instinct - And Why You Should Never Ignore It!

My little Beatrice, my Bea Bug, my Buggy lovie girl.

I could write a book about following mommy instincts when it comes to the health of your children.  I am an expert.  Just a quick browsing of my archives will tell the tale.  Anna's story or Ben's.  I definitely deserve and honorary MD, but the medical industry seems to frown upon that sort of thing ;) 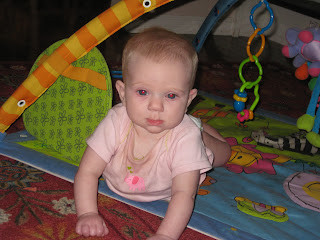 I can't remember what I have shared here already about this little ray of sunshine (and she really is a ray of sunshine...don't let that serious face up there confuse you.  She is just deeply concentrating on trying to crawl).  Beatrice early on showed issues with dairy formula and at about a month old, due to symptoms and her inability to gain weight, was switched to Alimentum, a hypoallergenic formula and sent to CHOP to see a pediatric GI.  The GI instructed us to concentrate her formula for a boost of calories.  This did help her to gain some extra weight.  Got her onto the growth chart.

She is a basically easy going and a happy little midgie of a baby.  But some things just kept nagging at me.  She started to get rashy and then broke out in eczema.  She was always drippy and she started scratching her face until she was bleeding and lacerated.  Just to name a few.  I decided to just go ahead and take her to an allergist at CHOP.  Even though she was on Alimentum it is still technically a dairy based formula and super sensitive babies can still react to it.  It was a long shot and I hemmed and hawed about cancelling the appointment. 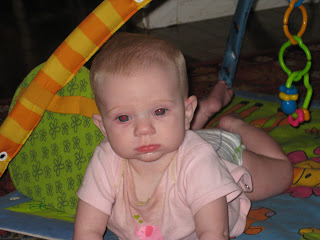 So I chatted with the doctor about the symptoms and he was a bit skeptical.  His feeling was that her symptoms sounded more like a GI issue than anything else, but he agreed to do a scratch test for dairy.  He said he doubted it would come back positive.  I agreed....I already have one kid off dairy and I know a protein sensitivity is not going to show up on a scratch test...and I assumed that was her issue.

But we were both wrong.  She had a big reaction with an 8mL wheal.  So she has scored herself her very own epipen and a switch to an amino acid called Elecare, truly hypoallergenic formula as well as an appointment for further allergy testing in a few weeks.

She was reacting to even the tiny bit of completely broken down dairy that is in the Alimentum.  So glad I went with my instincts that something was not right rather then wait until she had a full blown, dangerous reaction before anything was done.

Hopefully she is on the right track now.  And seriously mommas if you have an inkling that something just seems off with your kiddies pursue it.  Don't let a doctor tell you no, don't be intimidated, be fierce!
Posted by Jamie Carin and Claudio Romano at 10:05 AM

Amen. God gave us this instinct and I am so glad that your Bea is getting what she needs. My Bea is an itchy, allergy girl too...how 'bout that?

How is your little Annie doing?? What a trooper! Anna had to have a Picc line after her surgery for TPN nutrition. Thankfully I never had to take care of it...the nurses did it.

queen of the castle said...

Clara has a skin test coming up next Tuesday. We know about egg, but two times this summer she has come in from playing outside with red hands. Wonder what else will show up this time?

Clara looks like such a Clara! What will she be tested for? I will be interested to hear the results.

So glad you pursued this!