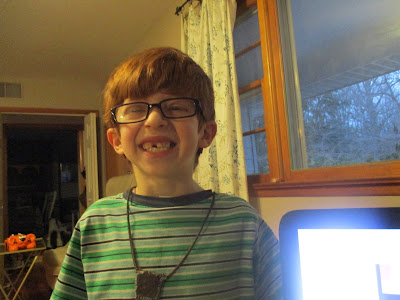 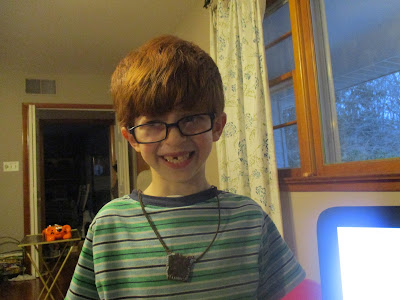 It has been almost a year since Ben has lost a tooth!  This is #3!  He looks like a big Jack-O-Lantern.

He has been nursing this tooth for a while.  Yesterday the kids got lollipops at the Allergist's office, but no one thought to grab one for Lucy.  So when we got home Lucy was besides herself without a lollipop of her own.  I asked Anna if she would give up her pop for Lucy and she did.  Today I had to run into CVS to grab a prescription and I bought Anna an enormous Blow Pop for the sacrifice she made yesterday.  My kids have a disgusting habit of sharing lollipops (*gag*).  So after hours of Anna nursing this enormous lollipop Ben grabbed it and popped it in his mouth.  Anna, grabbed the stick to pull it out of Ben's mouth and pop....out came the lollipop AND the tooth!

In continued grossness....Anna offered Ben the bubblegum from inside the pop so he could practice chewing with one less tooth.
Posted by Jamie Carin and Claudio Romano at 8:45 PM