I wonder how many bloggers have that as their title today followed by a picture of snow!! I am not sure you can even see the flakes coming down in my picture but I promise you they were!! 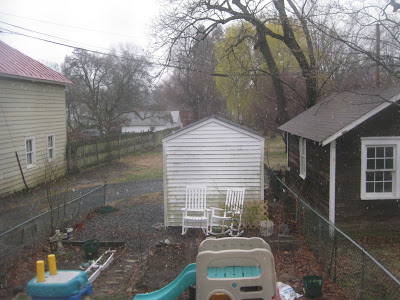 When I came in from taking the picture Annabella had a temper tantrum because I wouldn't let her come outside in the freezing cold and wet wearing her pajamas! I missed the part where she stomped her feet, yelled, and threw herself on the floor. But I thought her Jekyll/Hyde performance was SO funny. I laugh every time I watch this!

Ben was scribbling in this little notebook (cute note: the cover of the notebook has Strawberry Shortcake, the 80s version of course, and whenever he sees her he tells me that she is "so beautiful!" LOL) so I asked him if he could draw a face. He asked me to draw one first so he could see. And then he drew his very first little face!! A milestone for my little Bean! 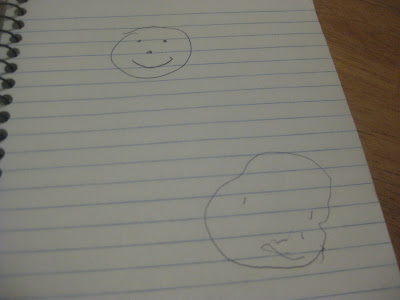 The below picture I feel like I could play one of those "How many things out of place can you find" games! Ben is sitting and eating(weird thing #1) a piece of ham (that I convincingly told him was turkey: weird #2) as his stuffed pig looks on wondering if it was his cousin (weird #3), and a box of Jewish, Kosher for Passover Matzo...which is no longer Kosher now that it has shared a table with the pig and the ham (weird #4)....anything else weird I have missed?? LOL 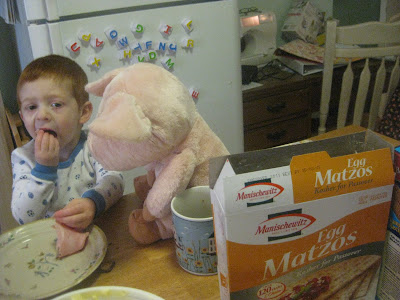 Posted by Jamie Carin and Claudio Romano at 2:30 PM

After Mary throws a raging tantrum, she comes to me smiling and says, "I all done crying!"

You missed that they are EGG matzos and Ben is allergic. LOL