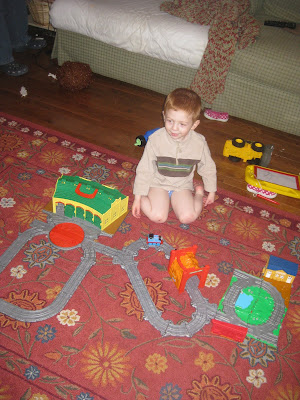 Some of you know that we have been working on potty training for a very very long time (if for no other reason than because Ben is almost always pictures without pants!). He is improving with the pee pee part of the equation. We can even go out in underpants depending on how long the trip is and to where. But poops.....OY!!!!!!!!!!!!! I wondered if the boy would ever make a poop in the potty. And we tried EVERYTHING!!! With underwear, without, candy rewards, punishments, to sit with him, to leave him alone, to read stories, to rub his back, to take him to the moon, to purchase him beach front property in Arizona, etc etc etc. Nothing seemed to make ANY difference.

The other day I was at Target and I picked up the Thomas "Take Play" Tidmouth Tunnel (pictures above in the center). I placed it on top of the toilet and explained he could have it once he pooped in the potty. There was much wailing and gnashing of teeth by Benjamin.

Then today. Out of nowhere. I was upstairs putting away laundry and Ben was playing around me. He disappeared and I didn't think anything of it. A few minutes later, amidst much excitement Benjamin announced, "I DID IT!!!!" Yes indeed folks. He had finally done it. All by himself he got up on the potty and DID IT!!!!!

He is now happily being indulged with as much Shaun The Sheep as a boy could stomach and playing playing playing with the latest addition to his Thomas "Take and Play" set!!
Posted by Jamie Carin and Claudio Romano at 11:37 AM

Jeffrey has been potty trained for two months now (we did the all at once approach), but he still requests a celebration every time he poops. The first time he got fries and a cupcake. We've been weaning him to easier celebrations, so now a quick story will do the trick.