It has been a while since I updated about Ben and his weight gaining issues. So thought I would give a quick update.

I don't remember dates etc, but this was all in the last month or two. He saw the pediatric GI that Anna sees. The GI ordered a whole bunch of tests (blood, stool, urine, and an Upper GI) all of which thankfully came back as normal. The only thing slightly off was his zinc was a bit low. Interestingly, low zinc can cause small stature, lack of appetite, and a lack of a sense of taste. So he is taking a zinc supplement daily. He was also prescribed Prevacid. I was never of the "give a med even though nothing indicates this is an issue" sort of person, but after our experience with Anna I jumped at the chance to try the prevacid. Anna was taking almost NOTHING by mouth, her three Upper GIs showed no indication of reflux, but the difference once she started the Prevacid was STAGGERING!!!! Her eating by mouth has improved so much! I haven't seen any change for Ben yet but it has only been a week for him (we had a big fight with the insurance, which we lost btw, to get it covered. Apparently they feel a child over 2 should be able to swallow the OTC caplets. I have to assume none of these people have had children, let alone children with food aversions and eating problems! I can't get the kid to eat a cookie I am not going to get him to swallow a caplet, but I digress).

So, after all those tests Ben saw a nutritionist who basically said, "Yup, he is tiny!" She recommended the Boost shakes for him (which he is already taking) and that he be referred to the feeding team at CHOP to be evaluated for therapy. His height was below the 5th percentile and his weight was right at the 5th. It used to be reversed...his height was always well onto the chart with his weight hovering around the 5th. The nutritionist said the only way to improve "linear growth" is to increase calories. The more weight they gain the more they grow. period. end. of. story. This has certainly been the case with Anna who is growing out of all of her clothes and shoes by leaps and bounds, but apparently that is what happens when you gain 3lbs since Christmas!

The pictures below are of Ben enjoying his promised McDonalds treat after his Upper GI. He was SOOO nervous about the Upper GI, but he did extraordinarily well!! I was truly amazed! He did exactly what they told him and had no problems drinking the barium.....he almost seemed to LIKE it! They would say, "take three big sips Ben!" and he would just go "GULLP GULLLP GULLP" without flinching LOL....So he more than earned his "hamburgerder" and french fries! 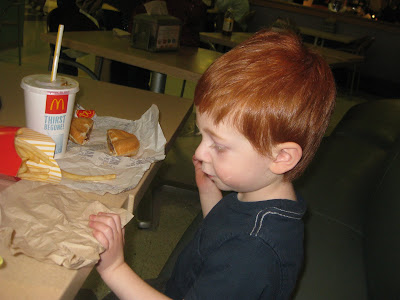 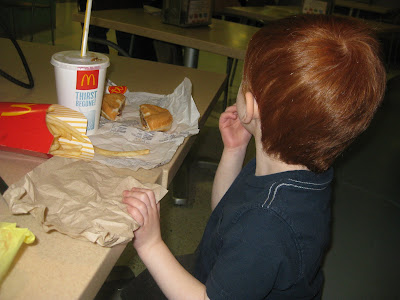 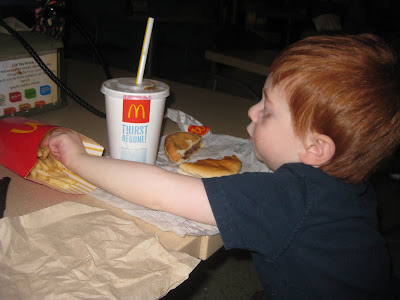 While we were sitting there eating our lunch in teh CHOP cafeteria a woman came over to tell Ben that he was so handsome and lovely that he should be on television LOL!

And here is just a little silly video of Ben during lunch. At the end he is referring to the lights on the ceiling. He noticed they change colors every few minutes. It is amazing what children notice that adults never do. I have sat in that cafeteria an endless number of times and never noticed.

And after a stressful day for a little guy....that is what he looked like on the drive home from CHOP. 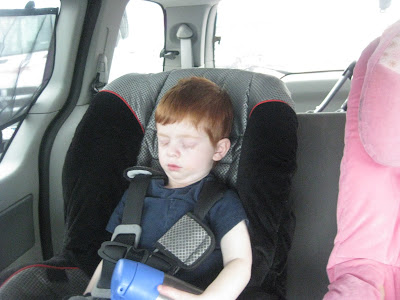 Posted by Jamie Carin and Claudio Romano at 10:32 AM

Yes, charity requires me to assume that NONE of those people have EVER had children if they think a two-year-old (or three or four) is going to swallow CAPLETS. Oh my.

That is nuts about the pills! I do hope they help Ben. I'm glad the tests found nothing serious, and I hope the great folks at CHOP can help you get him gaining more soon. I'm so glad to hear Anna is outgrowing everything!