Outside my window... The sun is poking through after a gray and dreary morning. Lots of stuff is starting to grow and bud. Birds have returned.

I am thinking...about my Lenten goals. Doing fine with accomplishing the "things", but not so great in changing the "habits" or behaviors. Luckily there is still plenty of time left in Lent!

I am thankful for...Poopies in the potty

From the learning rooms... Not much these days. Just our lenten calendar.

From the kitchen...bolognese sauce for dinner tonight. Not much baking going on since I am not doing sweets during Lent.

I am reading... The Children's Blizzard. It is about a blizzard (can't remember the year) that took place in the prairie (think Laura Ingalls time). It came on so suddenly after a mild morning and was such a vicious storm that many lives were lost. It is referred to as the children's blizzard because when the storm began rolling in in early afternoon most local schools dismissed students to go home and many of teh children got lost in the storm and perished. So far the book is a bit of a snooze because it is discussing Norwegian immigration to the area. I just want to get to the weather which is the part I was interested in. I am also reading a book about discipline by Ray Guarendi. And if anyone is interested: these talks by Dr. Guarendi are also very good.

I am hoping... that the next house we buy has self cleaning floors.

I am hearing...Ben make strange sounds as he jumps on my lap. He is asking me if his pillow is dry (I just washed it).

One of my favorite things... Holztiger figures. We love these wooden figures here. We have a nativity scene, a kangaroo, and a deer. I just got an owl for Anna and a rabbit for Ben to put into their Easter baskets this year. My kids bang them around quite a bit and they are really sturdy. And one of them accidentally got ink on one of them and I thought for sure that was the end of that figure, but it shockingly washed right off with just water! I was amazed.

A few plans for the rest of the week: Nice quiet week. We have been chockful of doctor appointments lately, but since Anna's scopes/biopsies last week I think we are basically done except a few followups in a few weeks with Nutrition for both Ben and Anna. So that is great news. This is of course until Anna's therapy starts and then we will have a super intense 4 weeks.

Here is a picture thought I am sharing: I finished coloring and laminating (with contact paper) a set of Stations of the Cross to hang in the dining room. Someday hopefully we can purchase a nice set and/or the kids will color their own. But for now these are nice and I am not embarrassed to admit that I really enjoyed the coloring! 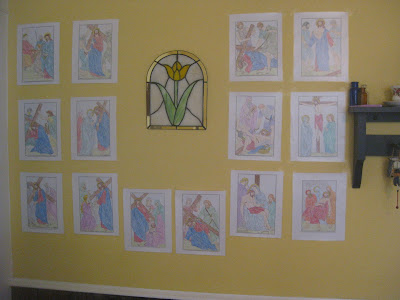 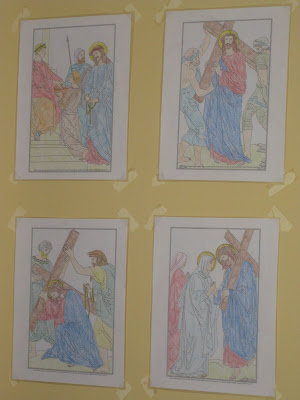 Posted by Jamie Carin and Claudio Romano at 3:44 PM