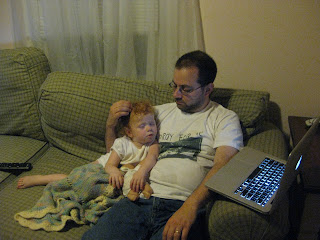 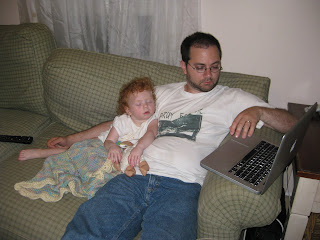 Well, since our anniversary never goes as planned....this year was no different.  This may just look like a sweet scene between father and daughter.....but it is actually a picture of an exhausted Annabella getting comfort from daddy while waiting for her Home Healthcare Nurse to return an emergency after hours call *sigh*

The day started off with me getting sick in a public place, so in a disgusting public restroom, with two small children in tow.  The two children thought it was hysterically funny to watch their mommy get sick.  This was followed be an arm thrashing leg kicking temper tantrum by the boy (like full blown throw self on floor sort of tantrum....in public as well).

We all came home and took a nice long nap.  Ahhh, maybe this day was getting better LOL..

Well, as Anna was getting into her crib somehow her gtube got knocked against the edge and popped out!!  So now there is literally a half inch-ish open hole into her stomach.  Because a stoma closes remarkably fast you have to get something in there quickly to keep it open.  Claudio tried to replace the tube, but was unable to fit it back in already.  We were able to get a smaller foley catheter in instead and we taped it and secured it.

After many back and forth calls to Home Healthcare we were told that we HAD TO take her to the ER immediately.  So I drag her to the ER, my poor sleeping, scared, little doll.  Thankfully they took us pretty quickly.  But guess what the doctor said!!  She said the stoma was stable and secured so there is nothing they could do there...we had done the right thing at home and to call her doc at CHOP in the am to get the tube replaced.  This is of course what I had requested to do when talking to Home Healthcare.  So a trip to the ER (including the bills that will come) was for nothing!! Grrr

I was able to take her into CHOP the next morning thankfully they were able to pop a new tube in with only minor trauma for Anna and they gave me a steroid cream to treat her granulation tissue which has been plaguing her.

So there is my little whine fest for the week.  :)
Posted by Jamie Carin and Claudio Romano at 8:11 AM