I have been waiting for the results of Ben's tests before I wrote an update.

Ben did great on the day of the procedure.  He was definitely brave!!  He got scared and cried at the things that were legitimately scary and otherwise he was wary but very brave.  My shy boy even chatted and joked with the nurses.  We were so proud of him.  He earned himself a new Thomas train.  He chose Gordon. 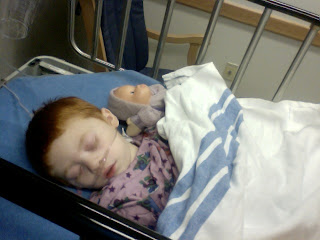 I can never resist taking a picture of them before they wake.
The only snaffoo was getting an IV in him.  He was very dehydrated and they told us that they were about to cancel the procedure because they had tried several times and just couldn't get a good IV going.  Just from counting the bruises left from the IVs the next day I counted at least 10 tries!!  Thank God he was already asleep at this point and had no idea what was going on. 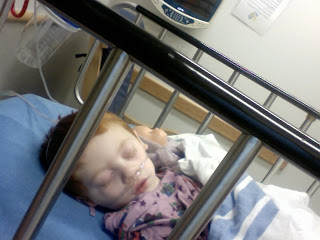 the first thing he said when he woke was, "can you take my bandaid off?"
What got the results yesterday and all of his biopsies came back normal.  Some of his bloodwork came back off.  Specifically his liver function.  Our GI is on vacation so we will talk to him about this later this week or next week.
That last bit of news we got today was that Ben and Anna will be able to start the feeding therapy program at CHOP on Sept. 20th instead of having to wait til November to start.  This is a huge relief for me. I had visions of an 8M pregnant me lugging through littles through CHOP everyday and then by the time we were done with the therapy program it would be Christmas and then the baby is due.  So when would we have been able to instill no eating routines and systems at home.  This way we will have plenty of adjustment time etc.
Posted by Jamie Carin and Claudio Romano at 3:10 PM

I'm sure some more answers might have been nice, but at least you know that there are so many things that aren't wrong. The news about moving the feeding therapy up is excellent! I thought that sounded really tough to do at that point in the pregnancy, this will be so much better. Praying for your little ones, that all of this hard work will make a wonderful difference.

It's making my heart break to see Ben under anesthesia! I am all distressed!

You have two of the bravest little children I know sending you and your family a big hug so that things start falling into place with them :)