Bouncing Over Our Fears 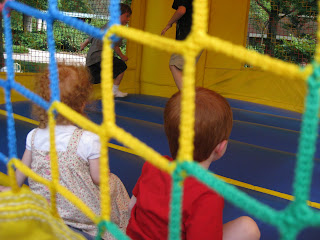 A week or so ago Claudio's company held a picnic for everyone and they had a BIG bouncy castle.  Anyone who knows Ben knows nothing pleased him more than bouncing and jumping and tumbling, but they also know nothing DISpleases him more than new things he has never encountered before.

So I wondered what his reaction would be to this big castle of bouncing delight!  Well at first he refused to go in, but Anna was interested and wanted to go.  When he saw she didn't immediately fall apart he was willing to go in.  But as you can see above they literally just sat side by side along the edge watching.  In their defense there were a bunch of older kids in there at this time rough housing.  Kids that were way too old for bouncy castles if you ask me. 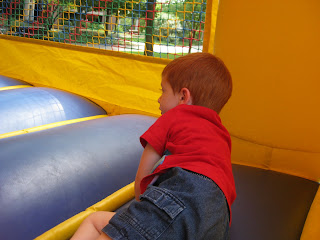 Ben, loosens up ever so slightly by LOUNGING as opposed to sitting up LOL...

Then I had the bright idea to move to one of the windows across the castle to watch from the other side.  I knew he would want to be as close to me as possible and so would toss his fear aside in order to accomplish this.  And I was right.  I peeked in the far window and he got up and scurried over to me....so I ran to the next window and he scurried there and so on and so on.  Quickly he realized, "Hey.....this is fun and bouncy and just my sort of thing!!"  And that was it.  He was a boy in love!!

I was so happy for him because I knew that if he could just conquer his fear that he would absolutely LOVE to bounce.  And it took just moments before he was literally bouncing from one side to the other laughing hysterically and chatting with the other young kids (the older kids were kicked out).

And of course Anna must do whatever Ben is doing so she rejoined him and they both had a blast.  Nothing is cuter to me than Anna's little proto-jumps.  She is just just learning how to jump and it is more of a gallop sort of thing right now.

And Ben will be facing another of he greatest fears on Wednesday.  He is scheduled for an endoscopy/sigmoidoscopy with biopsy at CHOP.  Ben is very fearful of doctors...even just a stethoscope leaves him trembling.  So IVs, and sedation, and *gulp* an enema will definitely leave him quite shaken.  I truly understand his fear as I suffered many many years with a doctor phobia (which I have by and large gotten over after a little therapy and a lot of hand holding by Claudio).  So please pray for this little, sweet soul that he can be brave.  He is such a sensitive little guy which is what has ME worried more about this little procedure for him than I think I ever worried about Anna's bigger procedures...she is just such a tough trooper and she would just go with the flow even if not enjoying it.  Pray that we can just bounce through this one as well!
Posted by Jamie Carin and Claudio Romano at 6:18 AM