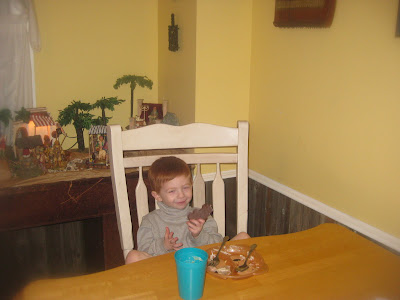 Finally on the third day and at least a half hour of coaxing, begging, game playing, and disciplining he ate the few pieces of meat required of him to get the dump truck. And in typical Benjamin fashion once he ate one piece of meat he realized that he did indeed like pork roast and ate the rest with no problem.

So what in his head had him insisting that he "can't" eat and that he didn't like it?? He had had it before and enjoyed it. So what is my little 3yr old thinking when he tells us he "CAN'T" with such sincere conviction that I begin to believe him?? 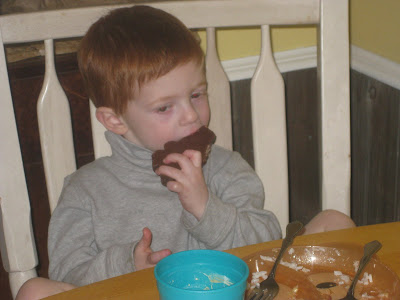 Ben's pediatrician has been worried about his weight as well. Ben has always been small. Hovering around the 5th percentile for weight. But now he has seemed to stall....and go backwards a bit. He has been having weigh-ins, the most recent of which was Thursday. He has basically not gained any weight since spring. At a few weeks short of being 3 he weighed in today at 24lbs14oz. This is probably the size of an average 1yr old. 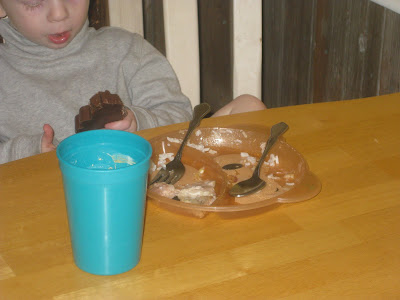 I knew this was coming and it wasn't what I wanted to hear from the doctor. Ben is now also labeled "failure to thrive". Which technically means nothing other than your kid is scrawny! But it is a label that signals possible other issues. The pediatrician's feeling was that it seems Ben's issues are behavioral...simply a matter of getting enough calories into him...but that we would be negligent if we didn't make sure that was the case. So his first GI appt has been made.

I am praying praying praying that the doctor (which is the same GI as Anna sees) doesn't order a whole battery of tests, but instead recommends some behavioral therapy and some visits with a nutritionist. But I have a feeling an Upper GI (at minimum) is in his future.

And I have to start wondering what in the world am I doing wrong??! Why am I unable to feed my children so that they grow?? It is so frustrating to me and anxiety enducing. We are at a total loss.
Posted by Jamie Carin and Claudio Romano at 7:15 AM

I am sorry to hear this, Jamie. I don't think it has to do with you - you try so much. Anna's problems have a clear physical cause, and Ben has allergy issues that contribute, right? I hope there is some sort of behavioral solution and that the tests aren't too hard on Ben or you.

I agree that it has nothing to do with anything you have done or haven't done. As Jen said, Anna has a medical basis for her issues, and if I remember correctly, didn't Ben have a hard time tolerating his formula as an infant? These factors are not things that you could control.

I am shocked that my son has never been labeled as failure to thrive. He's currently a little bigger than Ben (he just turned 3; last time he was weighed, in August, he was 25 pounds, and that was the first time that he had ever gotten above the 5th percentile for weight). At birth his weight was in the 3rd percentile, and when he started crawling it went down to the 1st. If he had been a breastfed baby, I'm sure the doctors would have assumed that this was due to an inadequate milk supply. He was incredibly hard to feed as a baby. I remember reading about how much formula he was supposed to be taking in, and freaking out because he was nowhere close. It was extremely upsetting. I had assumed that once he was out of the toxic prenatal environment (he's adopted) and getting good nutrition, that his weight would increase. But the doctor told me that he was programmed to be tiny and to have a tiny appetite.

Ironically, my son is now a very good eater. He doesn't eat huge amounts, but he eats adequate amounts of very healthy foods. He rarely turns down any food that I put in front of him (this is a huge contrast from how hard it was to feed him when he was younger). I think what's currently holding him back from gaining more weight is his food allergies, particularly the dairy allergy. Without dairy, it is very hard to get enough fat into him.

I am so sorry, Jamie. I would be in tears. This situation has got to be beyond frustrating, and it's not like all of these doctor visits are free.

FYI, a good OT book is "Just Take A Bite." It covers basically everything that would be done in feeding therapy.

I would be in tears too if I let mysefl dwell on it. I keep telling myself, with Anna anyway, that this is someone elses problem to solve. I am not the therapist, it has already been established that this issue is beyond me and requires professionals....so I keep reminding myself that the profesionals will fix it and it's THEIR problem now. Otherwise I would have a nervous breakdown at this point.

Thank you for the book recommenation. I will definitely check it out!

Jamie,
You've got some tough stuff to deal with! One thing that helps me with seemingly intractable problems is to set myself a really large number of different strategies to try. Large as in a thousand or two thousand (or in the case of table manners, 700,000). That way when I'm on attempt #256, I don't get so frustrated.

I've been reading a book called Switch, which is about how to change things when change is hard. It points out that when we face a big problem we're tempted to assume that we need one big solution to solve it. In reality, most solutions to big problems are incremental and take place over time.

The book also emphasizes that when problems are overwhelming, it's important to look for the bright points, the rare times when things *are* working. If you have a couple of small successes, it gives you a platform to work off of. Which, of course, gives us better incentives to keep trying new and different approaches.

what wonderful advice! Thank you so much for stopping in!

And you are absolutely right because despite all the issues we have been having with Anna's feedings she still gained a good solid pound!

And after posting this I have been paying close attention to Benjamin during meals. Something I never did even though I knew he wasn't eating well. And I have discovered he is very distracted (likes to chit chat...and being half Italian and half Jewish he has to chit chat with his hands and his mouth). So reminding him to take bites has actually been helping and a few other strategies have been working too....the boy actually ate some oatmeal this mroning!

Thank you again for the encouragement!