Life With A Tube 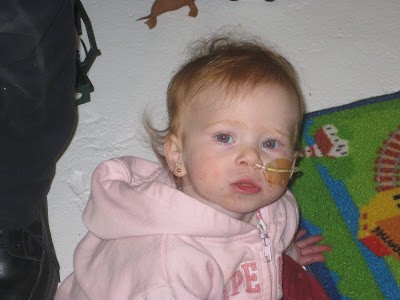 Well we are just over a week at home with the pump and overall it is mostly just a hassle more than anything else. Remembering to rinse out the feeding bags (you use them for two nights), setting up the pump, testing her Ph and flushing her line before bed, etc, etc just lots of little new things to remember.


When we first came home we were doing 12hr feeds overnight so we would start the feeds before she went to bed and she would walk around with this little backpack that came with the pump. Other than it making her a little top heavy she seemed to like the pack! 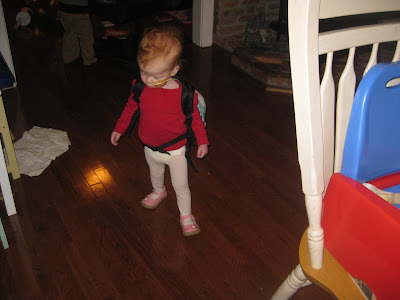 The first night we were home she did throw up again. But after that we took a few days and instead of pumping formula we just pumped pedialyte and it gave her tummy a few days to finally heal from the virus. Since then she has done great with the feedings and we have shortened her feeds to 10hrs. She is now getting 27ml of formula per hour for 10hrs a night. Her goal is 48ml/hour. So more than halfway there. 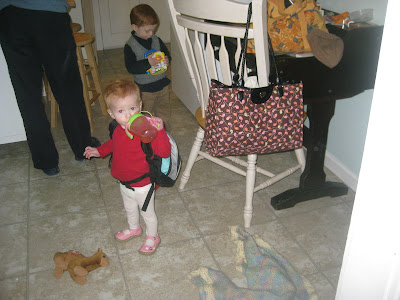 The only other issue we are having is pump malfunctions. Nothing is more frustrating then when the pump starts beeping in the middle of the night!! On Christmas Eve night we could not get it to stop beeping even after several middle of the night phone calls to the home healthcare nurse on call. They decided they would have to get us a new pump. I convinced them that it would be best to just wait till morning at that point. Morning of course being CHRISTMAS morning! So some poor guy drove a new pump to our door from Delaware on Christmas morning! Since then we have just had minor issues with the pump beeping thankfully. 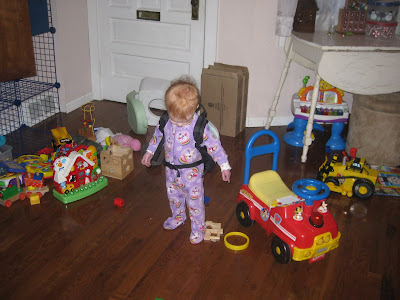 Last night was our first time having to replace a tube. The night before she someone pulled it out of her nose overnight. I assume it was an accident. I think she was hunting around for her pacifier and accidently got caught in it. Replacing the tube was a major trauma for little Anna. She is back to herself today, but she was quite a sad little girl last night. 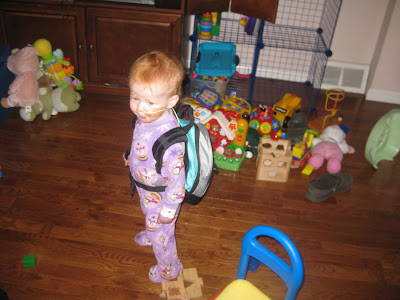 Today she was supposed to have a weigh-in with the nutritionist in the morning. Her appt was at 9am. And we are about 45 minutes away. So I got the kids ready and piled them into the car at 8:15 and off we went. We walk in and we are told that they had just called us at home. The nutritionist is sick and wouldn't be in. GRRRRRRRRRRRRRRRRRRRRRRR!!!!!!!!!!!!! SOO frustrating!! 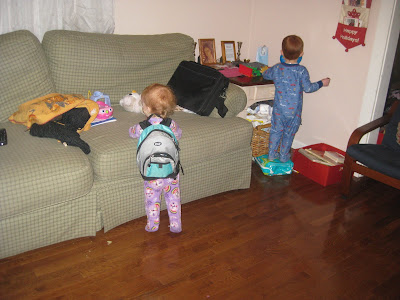 So other than that everything else is pretty normal. Ben took a pretty hard blow with the stomach bug and puked on and off for days. So much so that I took him in to the doctor. She prescribed Zantac to calm his tummy. By the time I gave him the first dose it had been about 48hrs since he had puked last. He swallowed the meds. Grabbed his stomach. And puked up the meds and all of his dinner. At that point I decided my luck was better with just the passage of time than with any medicinal help :P He hasn't puked since!!

I am *suffering* with a sinus infection from the cold I had before Christmas. Finally went to the doc today after several days of trying to convince myself that it would clear on its own.
Posted by Jamie Carin and Claudio Romano at 7:10 PM

Anna looks adorable with her little backpack! I am glad to hear now things are going pretty well. My goodness all of you have had quite the struggle these past few weeks. So happy both kids are healthy for now. I hope you get to feeling better quickly too. It's no fun to be a sick mama!

The backpack is so cute! Poor little pumpkin having to get her tube replaced. And poor Mama and Daddy!

Just out of curiosity, is it just regular formula that anybody would buy at the store? Or is it some kind of special prescription formula?

The pack is cute isn't it! I am sad it is just on loan to us. Once she is off the feedings the bag and all will be sent back to the medical supply people.

It is not regular formula it is called Peptamen Jr. 1.5 I am not sure if it can be taken orally (Cla tried it and said it was disgusting LOL) actually. It is really high calorie. I think each can is about 300 calories and right now she is getting about a can and a half a night. I think when she reaches her goal she will be getting at least two full cans if not two and a half....not sure as I let Cla do the math involved in filling and setting up the pump LOL I do the cleaning of bags, and the pH testing and line flushing.

Hi Jaime I just got your comment on Ava's blog. Ava's been g tube free for almost a year now. She's done great but her weight is always a stuggle. She can't seem to gain. Does Anna have a g tube yet? If you have any questions you can email me at mycdhlife@gmail.com Cool to hear from another CHOP family!

No g tube here. Anna is still on an NG and no plans to switch her unless other complications pop up. We are waiting for her to gain enough weight to be able to participate in the 4week day hospital feeding program at CHOP. Hopefully after the program she can start to be weaned off the tube feedings but it will just all depend on how she does. My son is tiny too (3yrs old and 27lbs) and I don't think Anna is ever really going to make it on the growth curve, and that will be normal for her. I am sure you know all the ins and outs of having a tiny child....a frustration in itself!