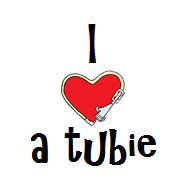 This week is the second annual Feeding Tube Awareness Week and I thought it would make a good time for some updates about Anna's health and to answer some frequently asked questions about tube feedings and Gtubes. 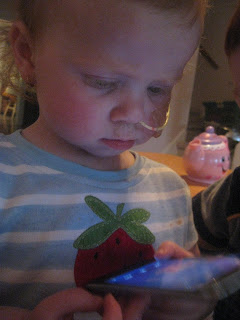 When Anna first started her tube feeding she got an NG tube which means it went from her nose (Nasal) to her stomach (Gastric).  Other than this sort of tube just looking kind of awful taped to a baby's face it also required a lot of maintenance to keep healthy and even then, with an active toddler, we got to the point where we were having to reinsert the tube several times a week and were having a lot of issues overnight during her feeds.  In addition, because it goes down the throat, Anna was having more issues with reflux, gagging, vomiting, and eating....things the tube was supposed to be helping. 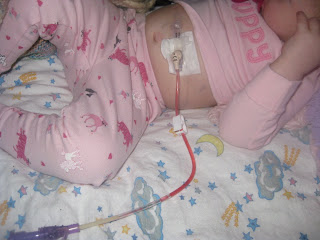 So in the spring we decided, along with her medical team, to switch her over to a G Tube.  This tube goes directly into her stomach via a small valve called a button.  It looks pretty much like the valve you would use to blow up a beach ball.  On the other side of the valve, just inside her stomach, is a small balloon filled with water and this is what keeps the tube in place and from falling out.  Above you can see her hooked up to her feeding (the red in the extension is tylenol this pic was taken at the hospital the day after she had surgery to place the tube..so she was still on pain meds).

Switching to a Gtube was a great decision for us.  It requires almost no maintenance, it is much more sturdy...meaning very little risk of it coming out just with normal playing, no one knows it is there unless they happen to see Anna without her shirt on, hooking up her feeding is much quicker.  And as we go along this journey with Anna it is likely she will have her tube for longer than originally thought so while it required surgery to place it and another stay at the hospital it is worth it for her comfort long term.

Some questions I am often asked:
How long will Anna have to have her tube?
We really don't know.  It just depends on her progress and her ability to avoid setbacks.  December was a really rough month for her with a cold, a virus, and a stomach bug...then Christmas and very soon after a new baby.  So we had a pretty hefty setback.  She lost 6oz. And where she was down to only 3hr feeds overnight she is back up to 7hr feeds now.  And so the weaning process has to somewhat start over now.  The criteria for her to get her tube out is to maintain her weight at around the 5th percentile, without supplemental tube feedings for at least 6 months.  So far she has been unable to do this.

6oz??  That is nothing....but she looks so healthy!!
This is one of the most common things I hear and I admit it frustrates me.  People don't understand that with small kids even 6oz is a lot.  Just to give you an example.  At her last weigh-in in November she had finally reached about the 4th percentile for her weight.  She was back on the chart.  With a loss of 6oz she was back below the chart (so now below 1%) and relabeled as "severely underweight".  And yes, she looks great....I personally thing she is stunningly beautiful.  But don't let her chubby cheeks fool you.  Children her age are supposed to have a good proportion of fat on their bodies.  They need it to grow and their brains need it to develop.  Anna has very little fat on her body and unless you see her parading around naked you would never know that.  In addition, whatever weight she has gained was with the assistance of her tube feeds.  Without those extra calories she has yet to come close to being able to maintain her weight.  And THAT is the concern.  She must be able to maintain her weight ON HER OWN.

Does the tube bother her?
Not really.  In fact I think she may be a little upset once it is taken out because it just has become such a part of who she is.  She occasionally gets something called granulation tissue around her stoma.  This is basically an overgrowth of scar tissue and it is the never ending plague of tubies.  We have medicines to treat it with that usually keep it from getting too out of hand, but the granulation does sometimes get uncomfortable for her.  When we set up her feedings at bedtime we ask her to show us her tubie and she lifts up her shirt so we can plug her in.  So she knows it is there for sure and as I said it is just a part of her at this point. I doubt she remembers not having it.

Can she go swimming?
Yes.  There is no open wound around her tube or anything.  It heals in the same way a hole in your ear for an earring would heal.  And the tube itself is sealed with a valve that is only unlocked by the extension used to plug her in for her feeds.

Is she sick? Why does she even NEED a feeding tube??
No, Anna is not sick.  In fact if you don't see her bare stomach where her tube is I doubt you would ever know there was anything wrong with her or what she has been through.  Because she had an obstruction in her small intestine (Annular Pancreas) for the first year of her life a lot of things happened.  1. Anna never learned to eat properly and developed food aversions and negative behavior around food due to discomfort when eating  2.  Anna has silent reflux  3.  Anna's stomach was distended from constantly having food in it that was not passing through in the normal amount of time.  This left her stomach stretched out and out of shape and even though the obstruction is corrected her stomach still doesn't empty properly.  So, in simple terms, Anna doesn't know how to eat enough and her body doesn't know how to give her queues for hunger as well as normal.  All of these things will hopefully continue to improve with time to heal and learn (a lot of these things are learned skills that most kids learn from birth....so Anna is a little behind in this area).  Until that is all worked out she has trouble eating enough to maintain her weight and is labelled as Failure to Thrive. 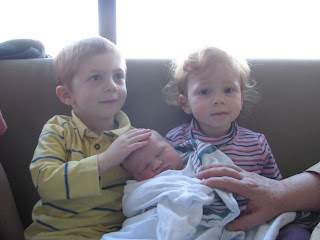 These days Anna is just pretty busy being a big sister, creating messes, and charming all who come in contact with her.
Posted by Jamie Carin and Claudio Romano at 11:53 AM 9 comments: