Just a few pics of our Christmas decorations. I never feel like our house looks Christmasy, but for some reason this year I feel things look sufficiently festive ;) 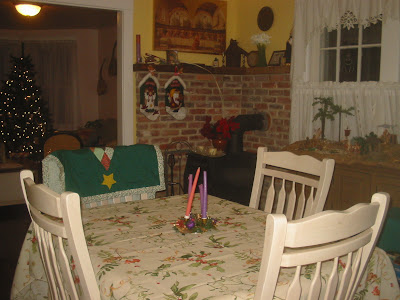 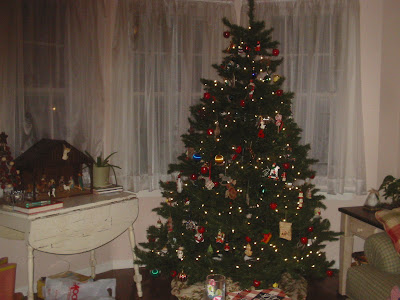 Our tree. Notice it has no star or angel on top! We never got one!! Each year I tell myself that I will get it after Christmas when everything is on sale, but by the time Christmas is over I don't feel like shopping or spending any more money so we just keep going without a tree topper. On the left of the tree we have a small(er) nativity with just the manger and a little tree that is sort of cut off made of bells...I love the bell tree!! 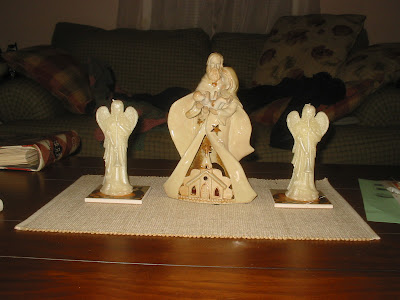 And just my coffee table....Holy Family that you can burn a candle in and two angel candles.

I have decided to try my hand at some Christmas cookies too....so I am off to make some peanut butter cookies!
Posted by Jamie Carin and Claudio Romano at 5:03 PM 4 comments:

Well, it may not be on DVD yet, but it is available on VHS from Amazon!

The Legend of St. Nicholas

The Rankin-Bass folks got a bunch of great Christmas specials. Sure, there's the classic Rudolph, and the legendary Year without a Santa Claus, and the strange but personally intriguing Rudolph's Shiny New Year.

There's some room for additions in the religious realm, though. Yes, it's true that Kris and Jessica say their vows before God in Santa Claus is Comin to Town, and that the animals bring presents for the baby Jesus. Yes, there's Nestor the Long-Eared Donkey, which tells the story of Bethlehem from...well...a unique historical perspective. And there's "The First Christmas" which stars Angela Lansbury as Sister Theresa (more in the next post).

But in all this...AND I might add, a few different renditions/tellings of the Santa Claus story...no mention of St. Nicholas!

So I modestly propose that someone with lots of spending money hire Rankin-Bass to tell the story of St. Nicholas. And let me know if you do, because I want to write it: particularly the scene when St. Nicholas slaps Arius in the face at the Council of Nicaea. I'm not in the Writers' Union, and I work cheap.
Posted by Claudio Salvucci at 1:35 PM 4 comments:

Ben from the outside.... 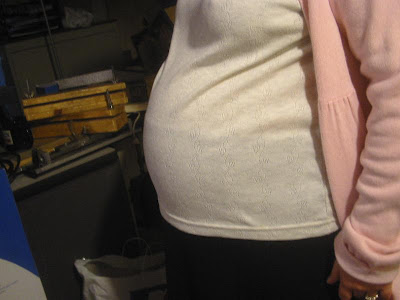 Ben from the inside...

We had our final ultrasound today. He is measuring small/average and they estimate he will weigh in the low 7s at birth (I hope they are right!). Right now he is 4 pounds, head down (and please don't change now!), totally adorable, and completely perfect.

I have weekly ob appointments now and weekly non-stress tests.

All good news today and everything else is just to be extra cautious.

Stay tuned for pictures of the nursery!
Posted by Jamie Carin and Claudio Romano at 4:28 PM 7 comments:

Here is a short video interview with the pastor at the church we have been attending. Last Sunday (the first Sunday of Advent) he celebrated the first Latin Mass there.

It has become a tradition for us to assemble our nativity scene after Mass on the First Sunday of Advent. Today this was an even greater treat since we attended the first latin mass celebrated at St. Peter's Church in Merchantville in 40 years! It was beautifully done and a great way to start off a new year in the Church. 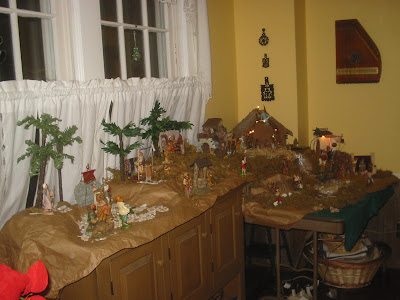 Here is a long view of the entire scene. It takes up an entire wall of our dining room. In the far corner is the stable and actual scene of the nativity, in the middle is valley and pasture land, and at the left side (closest to you) is the desert. 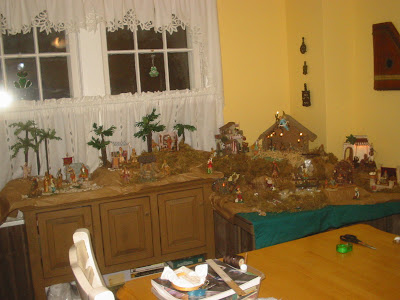 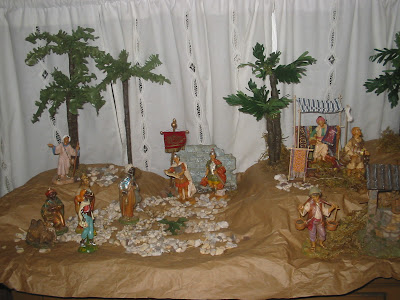 In the desert we find the wisemen and the Roman soldiers giving the proclamation of the census. On the right in the back is the textile shop and in front you can see half of the well. 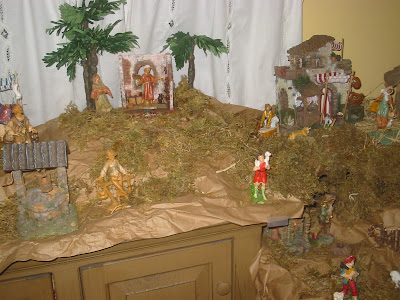 The middle back is a kitchen and just some random bystanders :) 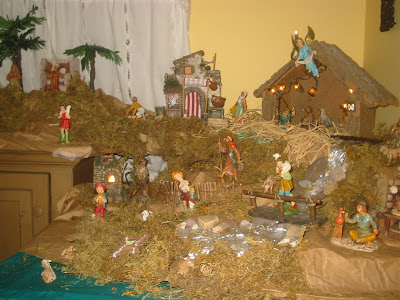 Here on the right we have the stable and next to it is the poultry house. We pretend the guy who owns the poultry house owns the stable LOL..Under the little nook to the left we are proud to introduce our newest addition...a CAVE!! We were so excited to be able to engineer this little cave. We have always wanted one somehow but just couldn't figure out the best way to do it. So we love the cave :)

But the question was...who lived in the cave? We tried some of the figures....not quite. So Jamie says "We need someone rugged looking." So, we pulled one of the zampognari (the pipers) and one of them was wearing goatskin pants! Yeah. That's the cave dweller.

Coming down from the side of the stable is a stream (which really looks like water doesn't it??!? We were pretty impressed ourselves). There are three bridges crossing the stream and a pond at the end. All the way to the right you can see a part of the pottery shop. 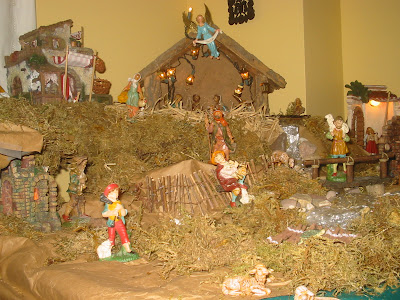 Just another view. If you look closely right up front here on the little bridge crossing the bottom of the stream there is a turtle. You may not know this but turtles were abundant in Bethlehem ;) 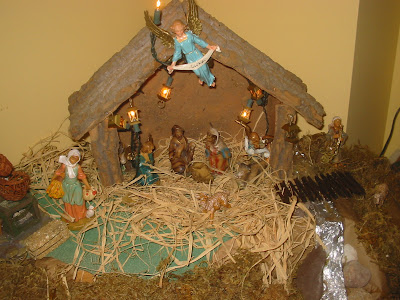 And there you have it! Whenever we put this up I wish we could leave it all year.

What sort of scenes/decorations do you put up for advent and Christmas?
Posted by Jamie Carin and Claudio Romano at 6:48 PM 13 comments:

After finally dealing with a laundry crisis and a serious dust situation I finally deemed our bedroom clean enough to set up the bassinet for Benjamin! 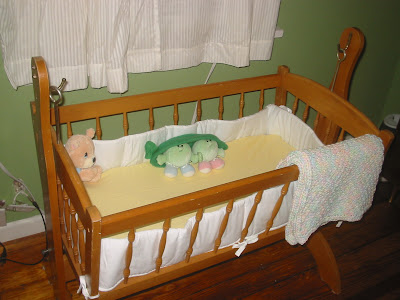 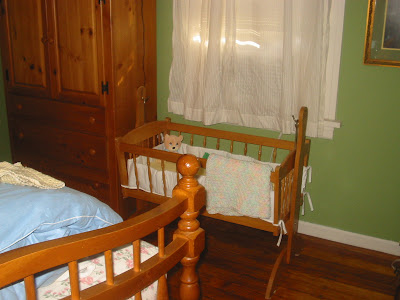 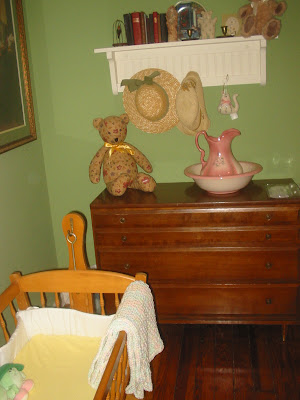 I pray he will have many peaceful hours of slumber here...and I pray harder that most of those hours will be at night! ;)

PS yes those are my stuffed animals on the shelf and NO Benjamin can't have them :P
Posted by Jamie Carin and Claudio Romano at 7:20 PM 3 comments:

I sold all of the figurines I posted on ebay but one! Didn't make a heap of money, but some nice Christmas present money for sure.

Claudio has sold 1 t-shirt and 5 bumper stickers on cafe press (keep an eye on the blog for links and info about our cafe press products.

I made 10 dollars answering some surveys through CashCrate

And as of this month we have lowered our monthly expenses by more than half!

Thank you for tuning in to this months "Salvucci Money Matters Moment" please stay tuned for this weeks weather...