we were running a little behind this morning so by the time I put Ben down he was RIPE for a nap! I put him in the crib and tip toed out. He made a few wimpers of exhaustion. A minute or two later when I came to check on him this is what I found: 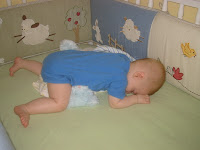 What is that pile of stuff under him?? (btw I put him down at the other end of the crib facing the opposite direction) 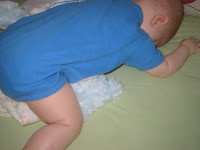 Is that a teddy bear head poking out from UNDERNEATH Benjamin?? Let's get a closer look.. 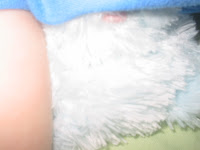 Yup...there is his little fuzzy head poking out! Accompanying the teddy bear are two blankets that Benjamin pulled over, piled up, and climbed (?) on top of. LOL

Posted by Jamie Carin and Claudio Romano at 10:30 AM

So me and you have been busy today and I just realized after sending what seemed like hundreds of emails to you (I apologize in advance) that you are getting NONE of them.

I apologize for when my server is back up and you get them all.

Meanwhile Ben is the cutest thing on this planet!

Do you think Ben is going to teach these tricks to his new little cousin?

He will teach them (he has two new little girl cousins!) only the MANLY tricks. The boy needs to keep up appearances! ;) In this case he would have to tell his girl cousins that he was WRESTLING the teddy bear...yes of course...wrestling!! NEVER EVER snuggling a teddy bear!