Anna is almost three weeks old and doing well! She is definitely fussier than Benjamin was, but Ben was freakishly good. She sleeps well at night usually waking once in the wee hours to eat. She is starting to be awake more and alert. She enjoys batting at the animals on her activity mat and actually rolled over once. We are fairly sure it was just a fluke though. 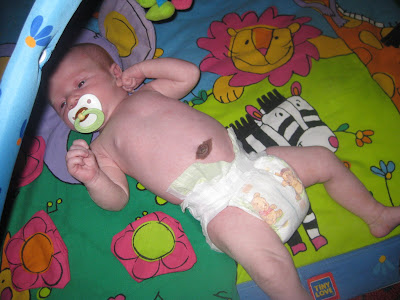 At her two week check up last week she was already 8lbs4oz and happy and healthy. The only minor issue was an umbilical granuloma which is a little piece of umbilical cord that remains once the stump falls off. The doctor treated it with silver nitrate. Unfortunately, the silver nitrate leaves this hideous brown stain that shows no signs of wearing off!!

Benjamin has had a rough week between teething, adjusting to his new sister, and a weird unexplainable fever. He definitely has a temper and knows how to use it. We are trying to give him lots of extra attention, but we assume this will just take some time. 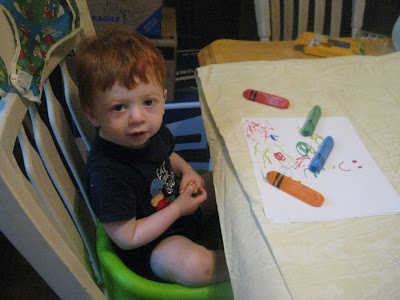 In an effort to keep Ben happy and occupied we broke out the markers and crayons for the first time. He did a little scribbling and then had more fun sorting everything.
Posted by Jamie Carin and Claudio Romano at 12:02 PM