Claudio, Why is Your Leg White and Ginormous?!

So two weeks ago the kids were coming down with colds, it was rainy, and I slept very late due to a bad case of insomnia. So Claudio recommended that I go to the Church across the street, Sacred Heart, for the 10:30 Mass and he would stay with the kids and then he would go to Mass later...

So, I am at Mass and they were just about to start the homily when I see my neighbor at the end of the pew trying to get my attention. He whispers to me that Claudio has fallen down the stairs and broke his leg and is being taken to the ER via ambulance....along with Benjamin who may have hit his head.

WHAT?!?! He rushes me home as the ambulance pulls down the street. The police were still in my home because the baby was upstairs napping. So I grabbed Anna, called my parents to come over ASAP, changed Anna's diaper, grabbed a bottle, a blanket, a diaper, and her bouncy chair and handed her over to my neighbor so I could run over to the ER to see what was going on.

Basically, when I left for Mass Claudio was carrying Ben down the stairs to play with the trains. Claudio was wearing just socks and slipped on the bottom two steps and knew immediately that he had broken his leg. He managed to crawl over to the phone in the basement and call 911.

At the ER Ben was checked out and he was fine. Claudio on the other hand broke his leg in three places and required surgery to put everything back together again. He also broke his hand. So he has two casts on and two incisions in his leg.

After a 3 day stay in the hospital he came home, but because of the broken hand he can't even use crutches. He has a walker he hobbles around on, but he is basically immobile. This Monday we see the orthopedist again who will remove his big plaster cast, remove the staples, re-xray and recast (with a lighter, fiberglass cast). Then he will have 4 more weeks, assuming everything is healing well, before the cast comes off.

So things have been a little nuts here!! But below are a few pictures of the "ordeal". 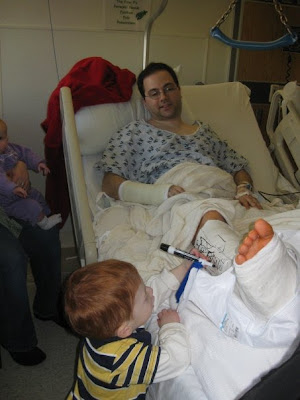 Ben found only one benefit to daddy's accident. 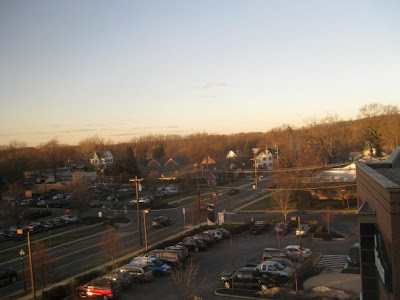 Claudio's view of Mt. Holly from his hospital window. Luckily he was taken to Mt. Holly hospital which is walking distance from our house. Made my life a little easier.

Anna getting a quick snuggle from Daddy. 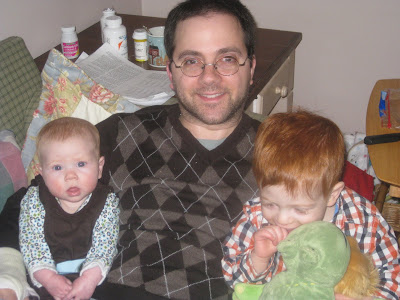 The extent of daddy's parenting ability at the moment: Snuggling the kids for as long as they will tolerate sitting in one place. Luckily Ben can always be coaxed over with the promise of some Youtube videos. 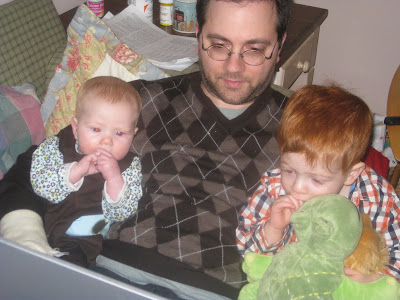 Posted by Jamie Carin and Claudio Romano at 1:30 PM

I am so sorry! I hope that he heals quickly!