Many of you know about the eating problems Ben has had literally since the day he was born. He was unable to suck (a basic baby reflex) and never once able to latch on at all to breastfeed (not even a bad latch). We were basically sent home from the hospital not knowing how we would feed our baby. He even struggled with bottle nipples and today he is 8 months old and still can only use a slow flow nipple. Once he started on baby food a few months ago he seemed to be having trouble swallowing and would end up gagging and vomiting.

My friend Katherine's little boy had had somewhat similar problems and helped me to do a little research into tongue ties. After much research and consideration we decided to take Ben to a doctor on Long Island who is a specialist in tongue tie's and correcting them to see if this is what was causing Ben's problems.

And indeed it was! His tongue was between a level 3 and 4 tie and his upper lip was also tied. She corrected both and we are praying that will be the answer and Ben will be able to start eating a more varied diet without the problems he had before. And maybe for mommy's sake we can switch to a faster nipple and it won't take him 45 minutes to finish a bottle!

He is recovering well for his snips. The doctor said to keep his hands out of his mouth for three days. When Claudio and I looked at her as if she was out of her mind she recommended putting socks on his hands. Well as you all know we never pass up an opportunity to put Ben's clothing on the wrong part of his body so we were all for it! ;) In actuality he has not been putting his hands in his mouth for whatever reason so we haven't had to worry about it, but we still tried this out for fun last night LOL....yeah we are evil parents ;) 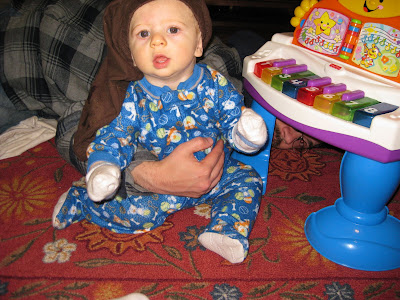 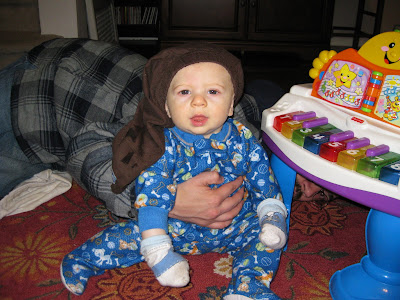 Interestingly it didn't hinder his superior piano playing skills one bit!
Posted by Jamie Carin and Claudio Romano at 8:19 AM

What a beautiful boy! I am so glad to hear he is thriving, and will now be able to enjoy some good eats!

Well Thanks be to God for finding out the problem and getting it corrected! Little Ben looks as cute as ever and no worse for the wear; I'm sure if we adults had that done, we'd all be writhing in pain for a week! What do you think he will want to eat more than anything else?

I'm so glad you were able to figure this out!

Yay for Ben and his parents and yay for Katherine, too! So glad to hear he is fast on the way to becoming a gourmand and fixing his mama yummy dinners every night. ~Lynne in VA