Two Steps Forward, Three Steps Back, You Do The Hokey Pokey and You Turn Yourself Around... 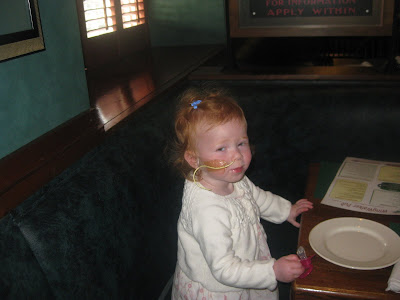 Just the latest and greatest about Anna her progress.....

After several phone calls with her GI to discuss her ongoing issues with tolerating her overnight feeds and no change in what she is taking by mouth.  And how the vomiting is causing a lot of stress for Anna (and her parents) because she is needing her tube replaced over and over.  Not to mention the trauma of vomiting in itself and the eating/food aversions it causes.  She definitely needs no extra food aversions!  The GI felt we should do a Milk Scan to test her gastric emptying/reflux.

Anna had her scan on Monday morning and she did great (this kid could give classes on how to be a good patient).  The results showed mild to moderate gastric emptying issues, but she was having several episodes of reflux.  We have decided, based on the results, to switch Anna to a g-tube with the possibility that she will need to be switched to a g/j-tube in the future.  We have an appointment Monday morning with her surgeon (the beloved Dr. Adzick!!) to discuss the procedure and to schedule it.  The surgery requires at least a one night inpatient stay (I am saying "at least" because it seems for Anna these things tend to require more time for her!).

Last week we also received a somewhat discouraging phone call from the Feeding Team at CHOP.  They had been reviewing her records and were very concerned to see the difficulty she has been having tolerating her feeds.  Because of that they want to reevaluate Anna with the whole team and psych.  Their feeling is why give a child intensive therapy to teach them to eat more when they literally can not physically tolerate any more food.  I am hoping with the better then expected Milk Scan results that that will swing them in the right direction.  So we are waiting on an appt for her new evaluation.  They are so back logged and wait listed that we have to wait several weeks/months to get back in for that.  We are on their cancellation list though so hopefully that will help (when she had her original eval. we called in November I think and got a February appt, but they called us with a cancellation appt for mid December....so I hope the same will happen again).

So there you have it.  We are in a bit of a holding pattern right now with Anna.  But we are very excited to be moving to a g tube for her.  This will make things easier on everyone and will be totally discreet....unlike the big ugly orange tape across her beautiful face.
Posted by Jamie Carin and Claudio Romano at 12:36 PM

I have been following all you have been going through and I will continue to pray for little one and her family. You are a great Mom!
love,
Marie Siobhan of Math Solutions