It is amazing to watch the budding friendship between Ben and Anna. The constant rivalry and jealousy seems to melt away more and more each day.

Now they seek each other out for play and even for comfort. They share hearty belly laughs all day long.

Ben will lovingly share snacks and try to feed Annabella. He rejoices when she wakes from her nap. And they act silly together (fear not. No Annabellas were injured in the making of this blog post): 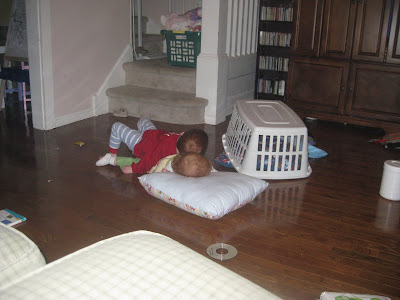 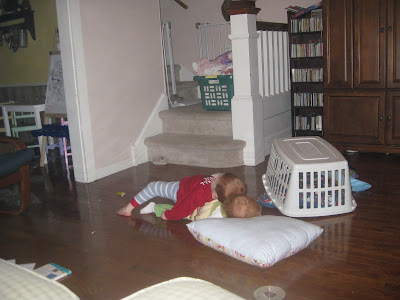 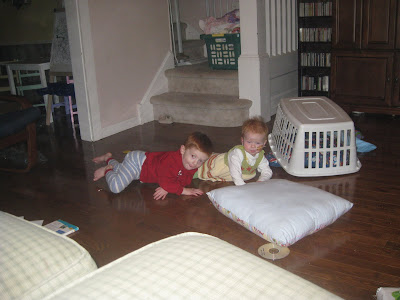 It occurred to me yesterday that Anna is just about the exact age Ben was when she was born! It is funny I felt like he was such a little boy, not a baby anymore. But I look at Anna as such a baby. Not sure if it is because she is so small or because Ben really had a weird sense of understanding and maturity (still does) for his age. He was born with wisdom I think.
So meanwhile Anna is 17.5M old and I think of her as such a baby that when she started stamping her feet and throwing herself on the floor it took me awhile to realize she was entering the "Two Phase" (I don't like to call them terrible because by and large they are amazing...just those moments of temper I could do without) and having her first tantrums!!
Her feedings have been going pretty well. Last night was the first night we had any trouble. She was up to 40ml/hr and she woke at around 5:30 (a half hour before the end of her feed) gagging. She threw up just a tiny bit. So we are going to call the GI team today to let them know and we are going to dial her back a bit tonight....probably to about 30ml/hr. Each can of formula is a staggering 375 calories. So she is getting almost two full cans at this point! And both Claudio and I agreed she FEELS heavier!! We are so used to picking up this little feather of a baby and now it feels like she must havea brick in her pants LOL! So good news!
And dear Benjamin is going to be 3 in one month!! I can hardly believe that my first little miracle baby is 3yrs old already!! He is so smart, so charming, so silly, with an extraordinary sense of humor! Now if I can just get him to use the potty he would be perfect! ;) Our latest potty efforts were derailed by Anna's latest hospital stay followed quickly by a terrible bout with a stomach bug. Poor guy needs a little consistency!
The new concepts he picks up amaze me. Cla mentioned to him left and right almost in passing the other night and he immediatley got and has been showing me which of his hands is left and which is right. He is counting to at least 20 now (maybe higher but that is as far as I have counted). He is working on sounding out simple words. And he sings ALL the time. I will try to catch it on video but he usually won't sing on queue.
Posted by Jamie Carin and Claudio Romano at 5:12 PM

It sounds like he's neck and neck with Jeffrey in his development (left/right, sounding out words, potty, etc).

Hi Jamie ;o)
Wandered over to your blog via Cathswap ;o) As soon as I saw that you're blessed with red heads too, I had to read on! LOL
Praying for your sweet Anna and all she's had to go though. What happened initially to cause her trouble? I didn't get that far back in your posts...
Blessings!
~Shannon
OrganicMamasShop.com

Thank you for the prayers for little Anna.

Initially she was diagnosed as failure to thrive around her first birthday. After some tests they discovered that her Pancreas had grown around her small intestine constricting it closed. She had surgery in October...she had a longer then expected recovery and wound up going two weeks without being able to eat or drink anything and since then her eating habits, which had been not too shabby before surgery, have just totally deteriorated. Once her weight has stabalized with the feedings she will be admitted to an intese 4 week feeding therapy program at the children's hospital. ANd hopefully then she will be on the right track finally!!

Isn't the budding friendship wonderful? I just love to watch it.