We haven't had a good "Ben is now dairy free" update here for a while.  So thought it was about time.

Ben had an appt with his Nutritionist today (we hadn't seen her since the summer before we took Ben off dairy) and I felt like this would be the weigh-in heard around the world!!!  We feel like his eating has improved by leaps and bounds, but I had this little fear that maybe we were making more of it then it was and seeing things that weren't really there.  I mean he certainly doesn't look any fatter.  He still looks like he is wearing his big brother's clothes LOL.  So I fretted and fretted....has he lost weight, is he at least maintaining his weight, did we make the right decisions?? 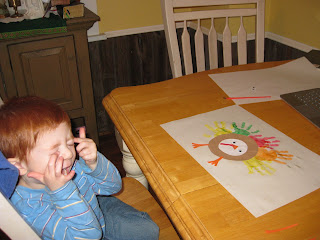 Ben and I made handprint turkeys.  He loved to be able to have paint on his hands.  And no idea what the eye poking is about!  That is what he did when i said to smile!
So, I was VERY pleased when i was told he had gained a POUND since early September!  An entire P.O.U.N.D.!!!!  This kid has not gained a POUND in any measurable amount of time in well over a year!!  And this was with NOO calorie boosting.  So nothing artificial about it.....just good plain eating more food!! 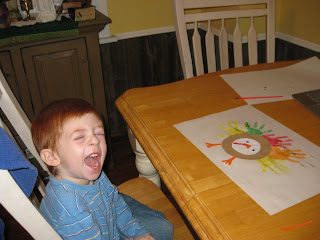 now there is that goofy smile I know and love!
There is still some concern about his height.  He is short, which isn't a big deal in itself.  The issue is that he has had NO "linear growth" since we started seeing the nutritionist...literally not even a centimeter.  So, the hope is that he just needs some catch up calories.  In other words he lives approximately two years of his life starving and malnourished.  He is eating an appropriate amount of calories for his age/size, but he has so much to make up.  So we were given some samples of allergen free high calorie shakes and juices.  We are going to work on getting as many calories into him a day as we can and see if that helps kick start the linear growth.  If not then we will be referred to pediatric endocrinologist to make sure there is nothing going in that department. 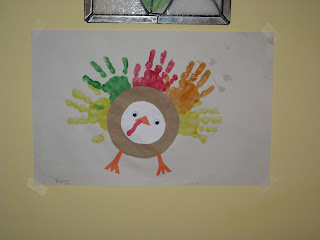 finished product.
So overall awesome news.  Poor little Benjamin has been suffering from the cold that just won't let go.  Took him to the pediatrician today and the doc thinks he has a sinus infection.  He got a Rx and hopefully he will be all better in a jiffy now!
Posted by Jamie Carin and Claudio Romano at 4:20 PM

Thanks for the update. Congrats on the pound! So great!