Ben got this floor puzzle from Grandma Joanne and Grandpa Aug for Christmas. I hadn't had a chance to take it out and work on it with Ben and it was just sitting on one of the shelves in the toy room.

While Sharyn was visiting and we were trying to squeeze in a few card games of our own Ben asked me if we could play "Flip Flop" with him when we were done (flip flop is the Charlie and Lola name for Memory game). So I suggested he go downstairs and get the game and practice it a little and that we would play Flip Flop later.

He scampered back into the dining room a few minutes later with this big puzzle and he proceeded to sit on the floor and put the whole thing together unassisted! Once or twice he would hold up a puzzle piece and ask me where it goes and I would remind him that you have to match up the pictures and to look for things that match. And he would diligently get back to work at it.

We were barely paying attention to him or noticing that he was actually getting it all together! I was so proud and happy for him! Before this he had limited success with puzzles if you weren't helping him piece by piece.

Don't let the stoic face below fool you. He just won't smile for the camera. He was very excited and loved pointing out all of the fish and sea life that he could identify. 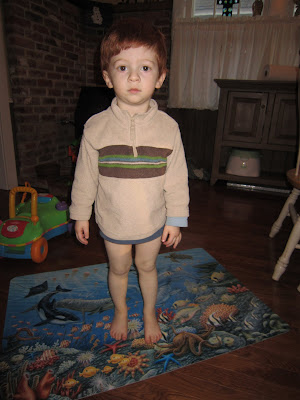 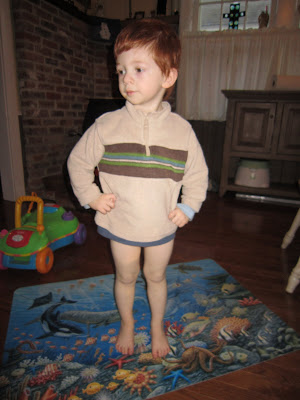 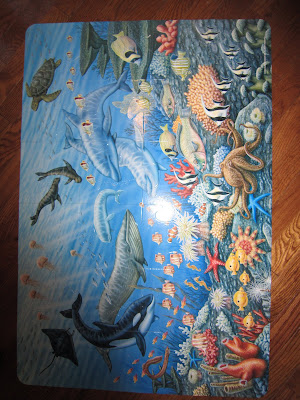 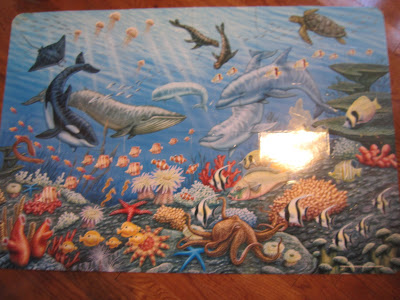 Posted by Jamie Carin and Claudio Romano at 2:21 PM

OK nice about the puzzle and all but did you notice that Ben is not wearing any PANTS. OK get back to me when you have rectified this situation. Meanwhile, you Aquarium trip looks like it was EXcellent. How is it that both Ben and Ann look exactly like both you and Cla???

LOL I assume this is Marie Siobhan since you are generally my only anonymous commenter. But Ben is rarely ever wearing pants. 1. he just doesn't seem to like pants and he is one of those always hot people 2. he is potty training and so I figure if he has an accident this way there is only one piece of laundry instead of two or three. So at home, when in underwear he is usually not wearing pants LOL I am always surprised at how many people find this disturbing. I figure he is still a baby and can get away with it so why not. He will have plenty of life to live where he must wear pants ;)

I did the same exact thing when I was potty training Jeffrey. For about two weeks he went around the house in a shirt, underwear and socks! (Of course, I put pants on him when we went out in public.) It made me cold just looking at his bare legs, but it didn't seem to bother him, and it made potty training much easier.