We have a few fruit trees around our property. Two apple and a pear.

We have been watching them anxiously since spring when they blossomed and then the fruits started growing...Our one pear tree has been covered with growing pears!  Our apple trees did not blossom too impressively and so we didn't have much hope for a good amount of apples.  The two apple trees are in massive need of major pruning.

I have picked a few pears for Anna and Beatrice, but I don't eat pears and had no idea if they were ready for picking.  When Cla tried one this morning he said it was delicious and perfect.  So I quickly did some research on preserving pears.  What I found out is that they are best picked BEFORE ripe.  Ooops.  Live and learn.

So we harvested what we could today and indeed many were already over ripe and thrown into the woods for the deer.

We also picked the apples because they looked perfect (and they are I had one with lunch!).  I was surprised at how many we got considering how the trees didn't seem to be doing that well.

So here is today's haul!! Pears in the orange crate and apples in the black. 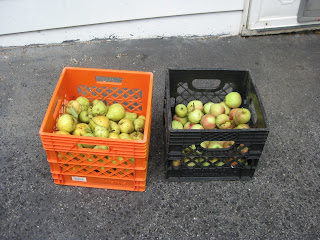 In other news, Ben has become quite the little monkey.  Climbing whatever he can find.  He loves especially to climb this Japanese Maple in our front yard.  It is like a game of Where's Waldo....can you find his little face in there?? 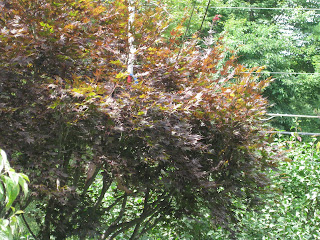 A little closer....see him now??  Considering a Japanese Maple is not made of the most sturdy branches it is shocking to me how far up it he gets. 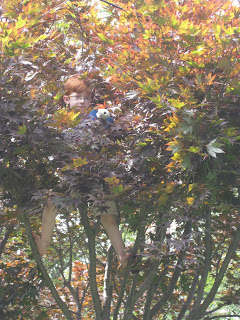 There is the tree from top to bottom.  The chair is placed there by Anna in her attempts to do whatever Ben does. 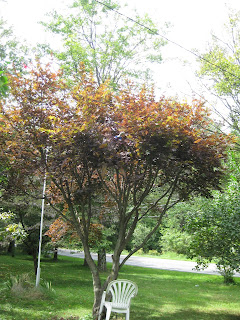 Instead here is a cute picture of Anna with her bicycle  :) 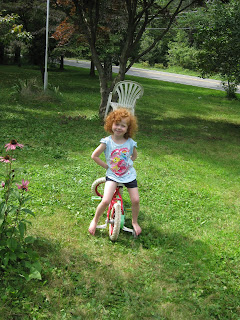 In the tree Ben found a bird nest!  The first time he found it he said it had baby birds in it.  Now the baby birds are gone and there is just an empty nest.  Ben took the camera to try and get a picture of the nest but he had it set to video mode...so here is the video of his bird nest.

Posted by Jamie Carin and Claudio Romano at 2:24 PM

Ben in the tree so reminds me of my boys. So much beauty and wonder, thanks for sharing!

There is a wonderful ginger pear butter that you can make it in the crockpot. It's a good way to preserve pears if you have too many to eat.

There is a wonderful ginger pear butter that you can make it in the crockpot. It's a good way to preserve pears if you have too many to eat.

I agree with Alison- PIE!!

You know what goes well in a pie with pears don't you? Rhubarb!