What's Going on at the Salvucci House?

Just the usual stuff. We finally pinned Ben down and cut his hair. This is one of my least favorite chores because he screams, cries, and carries on. This is the worst thing in the world to do when little bits of hair or flying all over. So then he gets hair in his mouth and starts screaming,crying, carrying on, and gagging. But now it is done and we won't have to do it again for a few more months. I love how he looks with freshly cut hair. He reminds me of a little turtle LOL 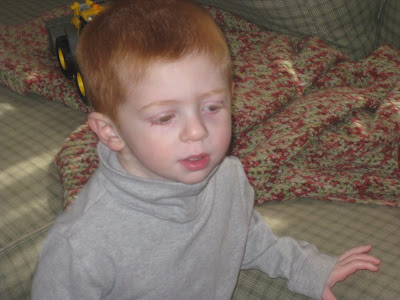 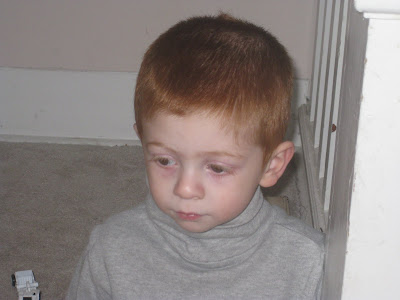 Annabella saw the Nutritionist last week for her official weigh in and she was 20lbs on the nose!! That is 3lbs since Christmas!!! She will likely weigh enough to qualify for her therapy by next month! Anna also had an endoscopy and a sigmoidoscopy on Tuesday. She did great with the sedation this time. Woke up calmly and peacefully thank goodness!

The doctor said that the scopes looked good. There was an area of her esophagus that was inflamed and they will know more once the biopsy results come back. It could just be from her feeding tube, or the cold she had last week, or any number of random things. We should hear by Friday if the biopsies showed any further issues. This will hopefully be Anna's last major medical hurdle!! She is such a resilient, feisty, happy little ball of energy. She amazes me.

These are the typical sort of shenanigans you might see going on in our house on any given evening.

Benjamin absolutely LOVES to dance. So I asked him the other day if he would like to take a dance class. He responded a bit puzzled, "No...I can dance in my house!" Duh!! And another homebody is born!

And just a note. The stations of the cross with the votive candles worked even better than I had hoped. Benjamin paid attention through the entire thing. Listening to the prayers so he would know when to put out his next candle. It made the prayers even more beautiful. We were so happy with this idea!! We highly recommend it for any family with preschoolers that you want to pay attention throughout stations! Not to mention that Claudio and I really loved the effect as well.

Hope everyone is having a fruitful Lent!
Posted by Jamie Carin and Claudio Romano at 11:54 AM

OK, that really is very cute and I'll forgo the obvious comments about the pants if we can indulge in some discussion about Hansen and "MM BOP". I think I will even not state the obvious here...ok, it has a good beat to get Ben dancin'...

LOL Marie Siobhan too funny. I had at first questioned Cla's music choices, but then it became quickly apparent that for the toddler/preschooler set it somehow worked. If Hansen had just made a children's album and not tried to break into the pop/rock scene we may all have been better off!

It puzzles me that the children are almost naked and Claudio is dressed in layers and outerwear. It's a puzzlement.